Creation of a Flatpak for a PCB design application

Name: DIY Layout Creator
Homepage: https://github.com/bancika/diy-layout-creator
License: GPL version 3
Upstream has been contacted: Yes
The author has given his permission for the creation of a Flatpak, but is neither a Linux nor a Flatpak expert, so please use me as a middle-man rather than bothering him - he’s busy with the next release

I have looked at 14 EDA applications for one suitable for designing PCB boards. Of those which offer PCB design, I have only found three which do stripboard PCB design. One has fancy graphics and other unnecessary features which make it slow and awkward to use, another has a rather surprising approach which IMHO would only appeal to users with a very specific requirement.

The third is called DIY Layout Creator (DIYLC). It is a very professional and effective program which is undergoing regular development. It does exactly what is needed, has an intuitive user interface, good graphics but not too fancy, useful functions but not obscure ones. For integration with schematic design software it can import a netlist. The menus are available in eight languages.

To declare my interest - I am not the author, but since I find it useful I have created an unofficial deb package for it. However I think Flatpaks are definitely the way for the future and would like to see a Flatpak for it. Although I am able to create a simple Flatpak I am not able to do this for DIYLC as I am not sufficiently expert in their creation and have no knowledge of the language DIYLC is written in - Java.

I wonder whether there might be a Flatpak expert who would be willing to create a Flatpak for it? 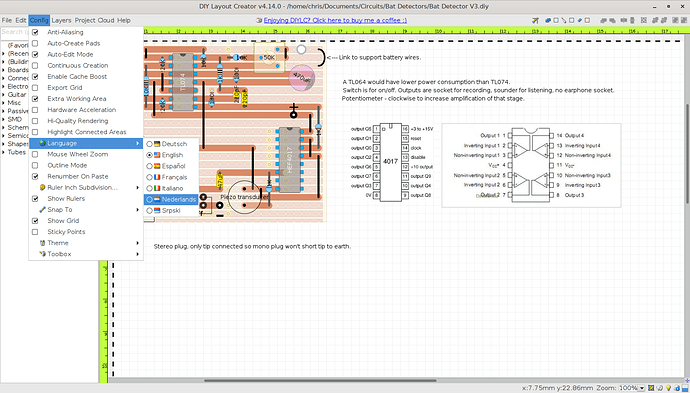 Ok, I just submitted the app for review, when maintainers approve it it’ll get included.
Check out https://github.com/flathub/flathub/pull/2030

Thanks to all who helped

It only took 2 days from this request to get a test version, and only a fortnight to get it published. The support for building a Flatpak is amazing. (Other packaging systems please take note.)